Up until 2018, we’d happily posted the slightest details of our daily lives (ok, only the positive ones) on Facebook, warmly welcomed Alexa into our homes, waited impatiently for the latest iPhone, and not thought twice about letting Google follow us everywhere.

This year, we learned, for example, that even turning off Google apps’ location tracking doesn’t really turn it off; that Apple throttles older iPhones, making us think we need a new one; that everything we say to an Alexa-powered device is stored on Amazon’s servers; and that Facebook will stop at nothing to give away our personal data. Whence this somewhat damning graphic, that shows the karma effect of all this Black Mirror-esque manipulation: 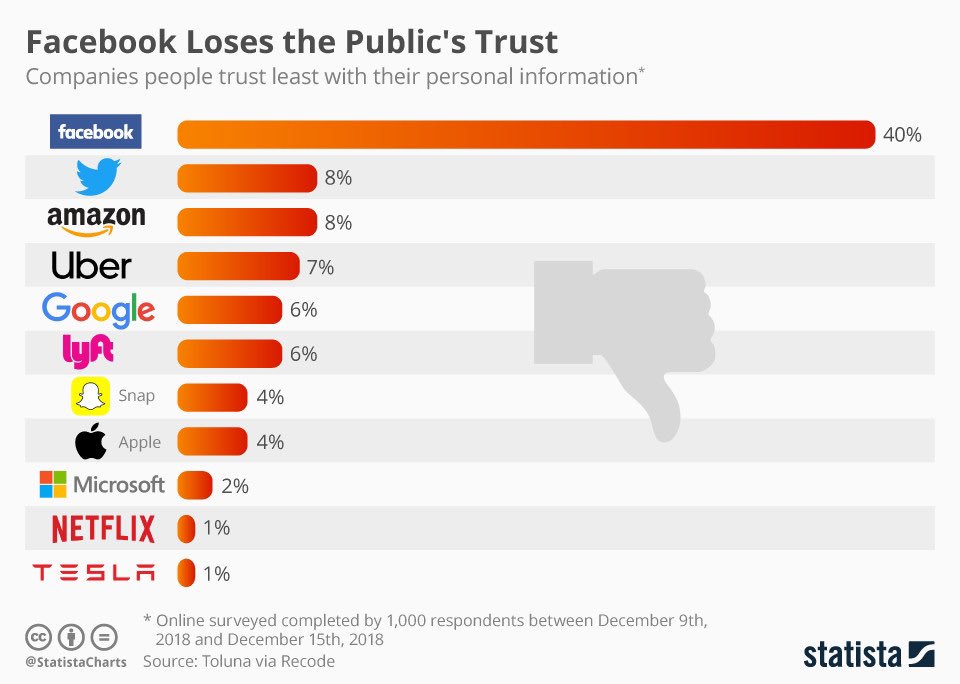 So just how bad was 2018 for trust in technology?

Facebook has, as it emerged this year, been misusing its 2.2 billion members’ data for years. Besides its enabling Trump to get elected via Cambridge Analytica & co – more on that here – it has also more recently emerged ‘the’ social network has been giving its users’ private messages to third parties like Spotify or Netflix; that it “permitted Amazon to obtain users’ names and contact information through their friends, and that it let Yahoo view streams of friends’ posts as recently as this summer”, despite claiming publicly that it had stopped doing so, according to another damning report by The New York Times. “We know we’ve got work to do to regain people’s trust,” Facebook’s Steve Satterfield told the Times, in perhaps the understatement of the year. Just how Facebook will go about that work will be the story to watch in 2019…

Amazon just said it sold “millions more” Alexa devices this holiday season than in seasons past. But almost inevitably, the more it sells, the more strange use cases crop up. There was the couple who, early 2018, were surprised to learn their device had sent a recording of one of their private discussions to a friend (tip: don’t give Alexa access to your contacts); debate as to whether Alexa should be allowed to become your child’s friend (psychologists quizzed in this article didn’t seem to have any problems with that); and the strange case of an Alexa-powered device telling its user to “kill your foster parents“, a mishap related to Amazon’s attempts to make its AI assistant more “conversational”. At least more and more users are understanding you have to actively turn off your Echo’s microphone to stop it listening to you; but will this stop this kind of freak accident in 2019? We’ll see…

Apple got in trouble earlier this year for deliberately slowing down the batteries of older iPhones, suposedly to make said phones last longer… but uproar from groups like French association HOP (which reminded Apple that planned obsolescence is illegal in France) saw the company backtrack and offer iPhone battery replacements at a discounted cost. Yet the damage is done, and reports suggest Apple may start throttling again anyway. At least the Cupertino giant also stood out this year for its strong stance on privacy, with CEO Tim Cook publicly asserting that “our own information is being weaponised against us with military efficiency“, only stopping short of directly naming Facebook and Google, and implementing clear indications throughout iOS 12 whenever your data is being sent to its servers…

Google, on the other hand, may have given its users new transparency on how to protect their privacy; it continued to use and abuse our data in incredibly scary ways. Late 2017, it emerged that turning off location tracking on Android phones doesn’t stop Google geolocalising you via mobile antennas — and thereby sending you more targeted advertising — and that there’s no way to turn this option off. This functionality is still active, as a report cited by macrumors.com confirmed this summer:

“An idle Android phone with Chrome web browser active in the background communicated location information to Google 340 times during a 24-hour period. An equivalent experiment found that on an iOS device with Safari open but not Chrome, Google could not collect any appreciable data unless a user was interacting with the device.”

This data is notably used by Google to prove the efficiency of its online advertising, as when Bloomberg reported, also this summer, that Google had acquired the purchase data of two billion MasterCard users, in a secret deal to demonstrate how its online ads provoked real-life retail sales. Though both parties swore blind that personal data is never revealed in their scheme, the way it works sends shivers down the spine. If someone searches for “red lipstick” on Google and goes no further online, but then within 30 days buys red lipstick in any brick-and-mortar store with their MasterCard, Google will notify that retailer of its initial role in the transaction. Tempted by going back to cash? Or by looking into how you can remove Google from your life?  Expect more and more moves in that direction in 2019.

Huawei, last but not least, emerged as the other big tech baddie to fear this year. After all, in 2018, European authorities started to listen to warnings from the CIA, FBI and NSA that the Chinese government uses Huawei devices to spy on the western world — that’s why no US carrier has a deal to offer the Chinese conglomerate’s products — thereby giving such apparently Trumptastic accusations surprising credit. Then, when early December Ren Zhengfei, daughter of the company’s founder, was arrested in Canada in connection with US accusations that the company violated restrictions on sales of American technology to Iran, Huawei’s ‘evil empire’ image seemed to be sealed. No further news has emerged since this arrest; but this should only be the first step in a potentially huge East-vs-West tech war. Watch this space…

So, how can you best protect yourself from the above types of skullduggery in 2019? That’s what you’ll find out right here on this blog, as the year unravels! But here are some ideas for starters:

And with that, we wish you a happy, safe and above all responsible 2019!